As the whole world celebrates the World Immunization week (24th -30th April 2018) I have been given the opportunity to write a blog on the same. So I will start with answering few very basic questions which bug the parents minds when they go to get their child immunized….

Immunization, or immunisation, is the process by which an individual’s immune system becomes fortified against an agent (known as the immunogen). The agent being a pathogen which has the potential to cause debilitating illness.

How does Immunization work?

When our body system is exposed to molecules that are foreign to the body, called non-self, it will orchestrate an immune response, and it will also develop the ability to quickly respond to a subsequent encounter because of immunological memory. This is a function of the adaptive immune system. Therefore, by exposing an animal to an immunogen in a controlled way, its body can learn to protect itself: this is called active immunization. This is the principle on which Immunization works.

This one is for trivia lovers… Edward Jenner is credited with discovery of concept of immunization way back in 1798 when he injected himself with Cowpox as a means to protect against small pox infection.

What are the benefits of Immunization to Individuals and the Community?

To the individuals who are vaccinated, it provides protection against developing certain diseases altogether and in some instances the severity of disease is attenuated. This is not only helpful for individual’s health and well- being but also has socioeconomical impact on the community as a whole. Not only is it an economically viable tool but it also raises the standard and quality of life of the community.

What are the diseases against which vaccines are available?

There are over 25 diseases against which rigorously tested and approved vaccines are available like Diptheria, Pertussis, Tetanus, Poliomyelitis, Meningitis, Hepatitis B, Hepatitis A, Chickenpox, Influenza, Yellow Fever and HPV (Cervical Cancer), with many vaccines in pipeline at various stages of research like Malaria, Dengue etc.

What has been the impact of Vacination programs being run worldwide?

Immunization is estimated to save 2-3 million lives every year – equivalent to the entire population of city as per WHO report. If we increase vaccine coverage in low- and middle-income countries by 2030, we could prevent 24 million people from falling into poverty due to health expenses.. World has seen eradication of small pox and near eradication of Poliomyelitis. Measles epidemic has decreased by 84%. Maternal and Neonatal Tetanus has been eradicated from Americas and South east Asia region. Vaccination also provides a protection against emerging epidemic of Antimicrobial resistance. It is one of the most successful and cost effective Public Health intervention till date in human history.

What is the Worldwide coverage of vaccination for various diseases? 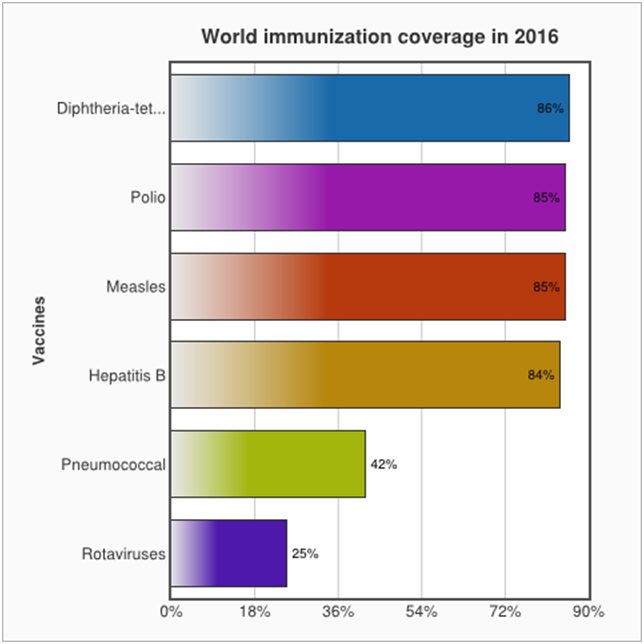 How safe are these Vaccines?

All the licensed vaccines are very safe. All vaccines before approval undergo rigorous testing, regular reassessment and continuous monitoring for adverse reactions.

What is Global Vaccine Action Plan?

The Global Vaccine Action Plan (GVAP) is a roadmap to prevent millions of deaths through more equitable access to vaccines by 2020. To date, progress towards the GVAP targets is off track. In May 2017, Ministers of Health from 194 countries endorsed a new resolution on strengthening immunization to achieve the goals of the GVAP. The resolution urges countries to strengthen the governance and leadership of national immunization programmes, and improve monitoring and surveillance systems to ensure up-to-date data guides policy and programmatic decisions to optimize performance and impact. It also calls on countries to expand immunization services beyond infancy, mobilize domestic financing, and strengthen international cooperation to achieve GVAP goals. It requests the WHO Secretariat to continue supporting countries to achieve regional and global vaccination goals. It recommends scaling up advocacy efforts to improve understanding of the value of vaccines and urgency of meeting the GVAP goals. The Secretariat will report back to the Health Assembly in 2018, 2020 and 2022 on the achievements against the GVAP goals and targets.

Why and when is World Immunization week celebrated?

So the message is loud and clear,Vaccinating our child not only provides individual protection but also protection against deadly diseases for the whole community. The benefit of vaccination should reach to all equally irrespective of their Socioeconomic status.